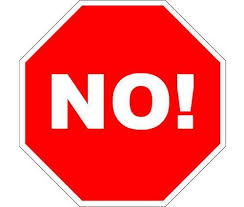 “No.” The most dreaded word that we small biz owners hate to use. Why? Because it says no to money, no to exposure and generally makes the person on the receiving end unhappy. But what happens when saying yes too many times starts to take its toll on us? Making us unhappy in the end?

Last year I learned that saying no was my favorite word, and guess what? It saved my sanity and it also saved my brand.

When we first start a business, I feel like we try to say yes to everything – somewhat to our detriment because we are solely focused on making money. “Can you make me a mermaid blanket?” YES! “Can you make me a baby hat that looks like a cow with spots?!” YES! Will you hate every second of your time making this thing that you really don’t excel at and don’t like? Fucking YES. But you made money right…..? Yes. Was it worth it? No.

When Knitatude first opened I said yes to everything I could. Now, looking back, I realize that every time I said yes to someone else I was saying no to me. No to my own company, no to my own brand, and no to my own personal time. I market Knitatude as more “upscale”. Solid and bold striking colors, over sized, modern, and fashion forward – with comfort playing a main role. By doing kitschy items with multi colored yarn I hated, or things that didn’t align with my brand, I found myself resenting the person who ordered it (which is not fair) as well as not enjoying the process – which is why I started Knitatude in the first place. I also noticed I was taking time away from my own company to fiddle with things I had never done before – sometimes having to learn a whole new stitch or technique, or searching for patterns to make these items when I should have been focusing on stock for upcoming markets and prepping new designs for my line. Which P.S. if you miss any of these steps, you will become one word: stressed. Hindsight: No amount of money in the world is worth that. When I started saying no, I started also feeling the pressure lifting off my chest, and none of the above happened. AKA = Bliss.

WHEN TO SAY NO

1. When you feel uncomfortable, or any part of the conversation gives you red flags or anxiety. Trust your gut. It’s usually right.

2. If any of the demands are too much for you to handle, and you feel like your work will either be rushed or that it will effect the quality of your item. Example: If someone wants something done and be ready for pick up in three days and you know it takes you 4-5 to complete- don’t do it. Save yourself the stress and their disappointment when it’s not up to their standards because you tried to haul ass.

3. If you plain just hate the item, it doesn’t align with your brand, or you just don’t want to make it. Your happiness matters too.

4. If it’s for exposure and they aren’t paying for it. If they want it that bad… they can pay for it.

HOW TO SAY NO

1. Say no… I know it sounds obvious (because it is), but honestly say the actual word “No”. Don’t beat around the bush with a maybe. Saying no right away, or as soon as you realize that you can’t do it ends the conversation. It also means that they can’t bully or bribe you into making it since it’s a solid answer.  “No” is a complete sentence too. You don’t have to explain why you don’t want to make something. Not to mention that saying it sooner rather than later saves you and them the time and dissatisfaction when you say no a few days/weeks later.

2. Say no politely. If you’re Canadian like me this should be easy hah,a but just say ‘I’m really sorry but I don’t make anything like that at this time” or “I currently am not taking custom orders at this point so I must say no at this time. I hope you understand.” Say it nicely. No one likes being told no – but they won’t die if that’s what they get. The world will not implode. Shocking, I know.

3. Have some other suggestions handy. This makes the blow a little easier and makes you look knowledgeable and helpful in the long run – yay positive brand association! Example: I don’t make knit baby items and probably won’t until I’m preggo myself, but if someone asks me for such items I suggest a few other knit companies that do. That way I still say no, support a fellow maker, and look awesome in the customers eyes.

I know it’s way easier said than done but I believe in you. You deserve happiness, and others deserve the business that you don’t want – so make em’ do it, and enjoy it while you kick back and relax, and focus on your own stuff.  Happy negating!