Working full time in advertising sales, and owning a small biz means that I am torn between two worlds: traditional media and social media. Though we are constantly told at work to embrace the new digital era, we are also consistently battling to show that despite what the papers say – traditional media (TV, Radio and Print) is not dead. As a person who has a small business, and with many friends who rock it on social media, I find myself caught in the middle. But with all it’s hype – I’m constantly reminded through numbers that social media is small potatoes and I have to think critically.

You may now be thinking “Chantal – you literally run No Shit Biz Tips on social media – teaching people how to use social media. You have a knitting company based on social media. What you’re saying is backwards.” Yes, I know,  but I don’t want you sticking your head in the sand, and to keep thinking that social media is the Queen of Sheba, and the best of the best.

If you think that social/digital media are the up and coming front runners, you’re half right. Digital is the new age: the younger generation ready to take over. If you think social media is THE front runner, and winning first place in the numbers – you’re wrong. It won’t be doing that for years – if not decades. Here are three common myths about social media debunked:

1. SOCIAL MEDIA IS EASY TO TRACK 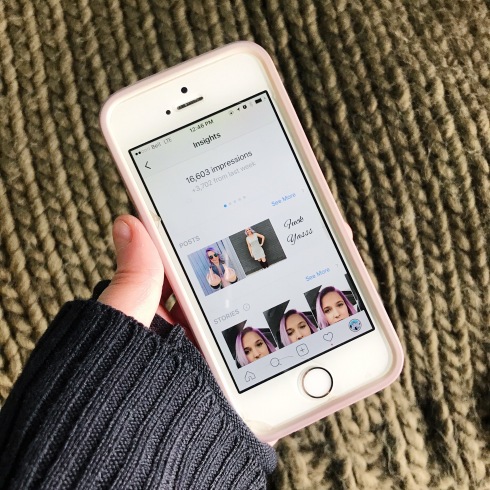 PART 1: If you have a business account on Instagram, you know that you can check a few stats: Impressions, Reach, Profile Views and Website clicks. Depending on how many followers you have, your stats will vary per week. Let’s speak just impressions though. On No Shit Biz Tips I currently get around 16K impressions per week.

What is an impression? “An impression is the total number of times your post(s) have been seen”.

Now here comes the sketchy part. Impressions are not views. They are the amount of times your photos and videos are being served on someone’s screen. So that 16K could really be 10K, and I would never know. This means that someone doesn’t have to actually pay attention to your photo to be lumped into your impression number. They can literally skim past, and still count as one of your numbers. Fun fact: On Youtube you only have to watch 2.5 seconds of a video, with NO volume and see half the pixels (that’s half the screen!) to count as impression. Cheeky cheeky social media.

PART 2:  BOTS. Just when you think you’ve got it figured out, these fuckers come to get you. Cheating the system, faking our impressions and eating up our paid advertising. If we thought our impressions were a rip – bots usually account for 3-37% of our social media stats. According to researchers, in 2016 one of the largest Russian bot companies “Methbot” (a high tech Russian Enterprise) alone ate up $180 million dollars from the online ad industry. Essentially taking your real paid advertising and showing it to fake accounts with no people behind them. That’s bloody bonkers.

Don’t get me wrong, a bigger audience means you’re getting your word out to more people in one single go, but follower count isn’t everything. There are tons of accounts out there that have a tens of thousands of followers that aren’t making any money; and others who have just a few hundred followers that are raking in the cash. I have a girlfriend who makes TRIPLE what I make yearly with Knitatude, and she has less followers than what I do. Just because people have a high following does not mean that it’s translating to sales. Quality over quantity, so stop comparing yourself to your competition, and to other people. You have no clue how much money they make.

3. SOCIAL MEDIA IS PERFECT FOR BUSINESSES

This one will come as a shock, but I am a firm believer that social media is NOT for businesses. I’m sorry folks, but it’s not. Social media is just that; a social platform for people to chat, connect and creep. Not that you can’t use social media as a business tool! You just have to use it for what it’s for: a direct person to person touch point for your company to your clients. Most of the people who follow small biz accounts are doing so because they want to see who is behind their favorite work; they want to see the person, not just the biz. I can’t connect with Mcdonalds, but I sure can connect with you!

Still not convinced? The top followed accounts currently on Instagram are: Selena Gomez (120M instagram followers, net worth $45M in 2016), Ariana Grande and Taylor Swift. Notice that Apple ($53.4 billion – 2.1 Mil instagram followers) and Google ($16.3 billion, 3.9M instagram followers) aren’t at the top of that list? It’s because they don’t have a face behind their brand… and before you say Steve Jobs – he’s dead, and the brand never revolved around him. Do you even know the second person who co-founded Apple? I sure as shit don’t. (PS it’s Steve Wozniak). Social media is meant for faces, so show yours!

Curious to know more about this stuff? Check out this awesome Video from Mark Ritson below. Beware – there is cussing!

What myths are out there in the social media world that you’ve come across as false? Let me know in the comments!

4 thoughts on “3 Common Social Media Myths & Are You Thinking Critically?”